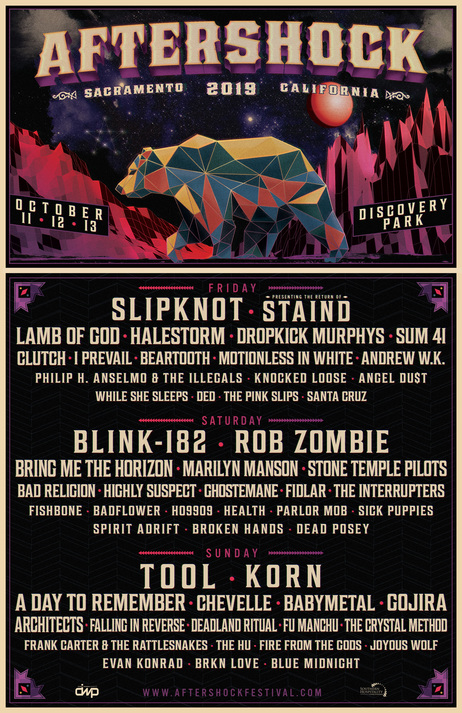 After welcoming a sold-out crowd of 60,000 people in 2018, Aftershock returns even bigger this year, expanding to three full days of performances from some of the most popular music acts, including a mix of chart-topping headliners and up-and-coming buzzworthy bands across the rock spectrum. The eighth annual edition of California’s biggest rock festival takes place Friday, October 11, Saturday, October 12 and Sunday, October 13 at Discovery Park near downtown Sacramento, CA, and is produced by premier independent festival producer Danny Wimmer Presents.

Korn’s Brian “Head” Welch says, “Aftershock Festival is always a unique experience for Korn compared to other festivals. One of the main reasons is we have many friends and family that live near Sacto, so it’s always like a family reunion when we play Aftershock. We’ve been gone a while and we’re coming back this year with a new album, new stage look, and a new excitement that is very contagious!”

The current music lineup for Aftershock is (subject to change):

VIP and General Admission tickets, as well as hotel packages, for Aftershock will be available beginning on Friday, April 26 at 12:00 PM PT.

Ticket prices for Aftershock will be as follows: