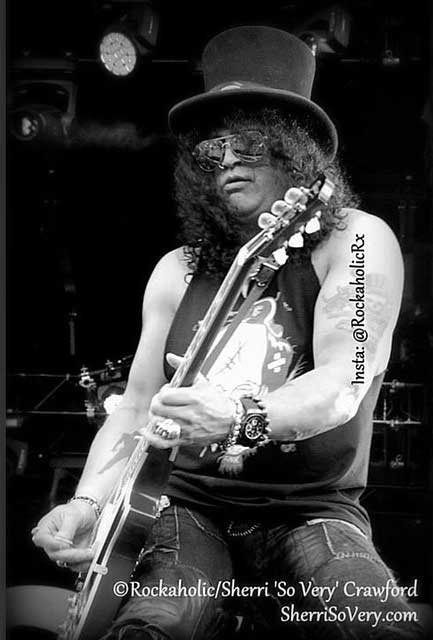 Once known as The Most Dangerous Band in the World, Guns N’ Roses has been kicking ass and taking numbers over a decades-long roller coaster ride of raucousness. Despite falling apart at its sex, drugs and rock-n-roll seams, the unthinkable happened nearly 22 years later and Guns N’ Roses regrouped.

Forming in 1985 and igniting L.A.’s rising rock music scene, Guns N’ Roses made music history in 1987 with the release of their best-selling U.S. debut, Appetite for Destruction. Influential, raw and unrelenting, the iconic album imbedded the band into rock music’s collective culture, like a colorfully obscene tattoo.

To celebrate, AXS is taking a trip back through all the attitude, angst, amazing ballads and debauchery that is Guns N’ Roses, with a look at some of the band’s best lyrics.

Featured on the band’s explosive debut – Appetite for Destruction – “My Michelle” is among the 12 tracks that helped Appetite become the best-selling U.S. debut ever (selling more than 30 million copies worldwide). While not a chart-topping single, “My Michelle” is a favored staple among GN’R fans. Inspired by a young woman named Michelle, it’s a dark and gritty ditty, mirrored in the opening riffs from Slash’s guitar.

Off the 1991 album Use Your Illusion I, “November Rain” was unleashed in 1992, peaking at No. 3 on Billboard’s Hot 100 charts. Weaving sweeping symphony sounds throughout the piano-tinged rock ballad, the song is one of GN’R’s most captivating, and longest. What’s more, few could resist the music video, featuring of-the-moment supermodel Stephanie Seymour marrying frontman Axl Rose (the two were dating at the time). Rose is quoted as saying that “November Rain” is a song, “about not wanting to be in a state of having to deal with unrequited love.”

Like the cheap booze of the same name, “Nightrain” is a fast and heavy-hitter. Appetite for Destruction’s third track, this one takes you on a frenetic ride down Debauchery Lane, with Axl at the wheel. Forceful and full of attitude, the song is a pure celebration of Guns N’ Roses reckless ways.

The opening track on Use Your Illusion II (both Use Your Illusion volumes dropped on Sept. 17, 1991, with Use Your Illusion II debuting at No. 1 on the Billboard Album Chart and volume one charting at No. 2) Civil War was a haunting tune in the making long before its release. Originally donated to a compilation benefiting Romanian orphans, the song opens with a now infamous Cool Hand Luke sample, followed by Axl whistling “When Johnny Comes Marching Home.” The protest song fittingly ends with Rose asking, “What’s so civil about war, anyway?”

1. Welcome to the Jungle

Slash’s opening guitar riff in “Welcome to the Jungle” ominously lures you in, while Axl’s consequent vocals sink in – and refuse to let you go. The lead track on Appetite for Destruction, the song is one of Guns N’ Roses’ most defining – and potent – releases. With the force of a Bruce Lee kick to the face, “Welcome to the Jungle” suitably set the stage for Guns N’ Roses reign as one of the most explosive bands in rock history.

For more info. on Guns N’ Roses or the band’s Not in this Lifetime Tour, visit the band’s website here.