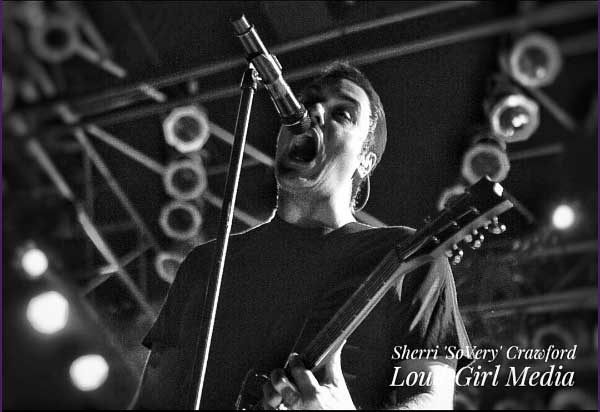 Rock band Breaking Benjamin continues its march of sold-out shows, including a notable performance at House of Blues Myrtle Beach. Based on the at-capacity crowd’s reactions, the Pennsylvania-based rockers delivered an A-plus performance to its legion of loyal fans.

Following an opening set by five-piece Detroit rock band Wilson, Breaking Benjamin frontman Ben Burnley and company set the stage ablaze with the opening guitar of Sold Cold (off the platinum-selling 2004 album We Are Not Alone). As the hauntingly dark riffs gave way to Burnley’s vocals, the crowd drank them in, as if they were pouring from the last water bottle on earth.

“Angels Fall” followed, off the band’s first No. 1 album, 2015’s Dark Before Dawn. The band’s been touring extensively in support of its fifth studio effort, which marked Breaking Benjamin’s first original music in nearly six years.

Prior to the album’s release, Burnley realigned himself with new backing musicians: guitarists Jasen Rauch and Keith Wallen, bassist Aaron Bruch and drummer Shaun Foist. The fresh lineup not only adds more drive and grit to the band’s power chords but also provides Burnley with something once lacking – backing, plus additional lead, vocals.

To wit, Bruch’s vocals have been featured on the current winter run, owning the mic on “Simple Design,” and others. Wallen (formerly of Adelita’s Way) also made a brief lead vocal appearance during the show, further showcasing the reborn outfit’s expanded capacity.

Halfway through the House of Blues set, a mashup of massive proportions arose, as the band paid homage to its influences. The band launched into the guitar-driven chorus of Rage Against the Machine’s “Bulls on Parade,” before igniting the packed house with Nirvana’s “Smells Like Teen Spirit.”

The crowd’s fevered sing-a-long to the covered 90s anthem gave way to roars, as Pantera’s attitude-laden “Walk” took over, rounded out by a rendition of Metallica’s “Sad But True.” Burnley and crew then returned to their hits, with fan favorites including “Polyamorous,” “I Will Not Bow” and Dark Before Dawn sensation “Failure.”

Wrapping with “The Diary of Jane,” Breaking Benjamin delivered a solid performance on its return to Myrtle Beach that spanned the spectrum of its discography. The band continues its short U.S. run through January.

I Will Not Bow

The Diary of Jane