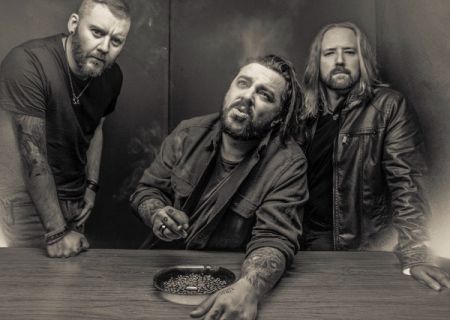 This article was originally published on www.axs.com by Sherri SoVery Crawford

Seether’s seventh studio album Poison the Parish drops today (May 12) – and the band has even more to celebrate.

The effort marks the band’s first album produced entirely by frontman Shaun Morgan and was launched via his new imprint Canine Riot Records. What’s more, the hard-rock trio is in the midst of the Poison the Parish world tour, which comprises headlining and top festival appearances.

To wit, Seether recently played a blistering set at Carolina Rebellion (part of the World’s Loudest Month series) filled with big riffs and even bigger melodies. Among the setlist was “Let You Down,” from the new album, with Poison the Parish among the heaviest and emotionally pure efforts of Seether’s career.

AXS.com caught up with Morgan just before the band’s Carolina Rebellion set. The singer and songwriter opened up about nixing creative confines, the band’s evolution, Rise Above Fest and something extra.

AXS: Poison the Parish seems to be a return to the band’s heavier side – how would you describe it?

Shaun Morgan: I would agree with that. I wanted to go back to a sound where we started. We sort of spent a couple of albums exploring a more alternative world, as far as songwriting and sound. It never really felt right to be something we weren’t. The band we are is a band that writes heavy melodies and stuff – and to go back to that kind of sound and to really mix it heavy and make it sound big and noisy, that’s the whole point. I get so bored with some of the mixes we’ve had before, where it’s like a flat-line EQ and there’s no dynamic, there’s no excitement – so that was the whole thing, to try and make it sound exciting.

AXS: With this being the first album that you fully produced, when you finished it what did that feel like?

SM: It felt really good. It’s interesting to me – I write the stuff, produce it now, as well – the interesting change is that there’s a much more defined emotional investment in this. There’s a lot on the line for me – now, it’s really my baby and it hasn’t been touched by anyone else, so she’s pristine and beautiful. And there’s something really exciting about that, but by the same token it’s kind of terrifying because it’s all on my shoulders – if this comes crashing down it’s like, “well, [my] fault.” But having a label that believes enough in us and what we do to allow me to produce it like that, that says a lot about the relationship we have with them, as opposed to the previous label.

AXS: Congratulations on doing that! As a musician and a songwriter, how do you push your creative boundaries?

SM: I don’t set them. I used to set myself boundaries, “You can’t write this kind of stuff and you have to be limited to this little area,” and when I stopped thinking like that, that’s when you really break something open. By not having a boundary you can write this whole spectrum of stuff and then you take them and go, “I want this one and this one and this one,” and you dump them into an album. So there’s no limit to what we can write and therefore there’s no limitation on what can eventually evolve into an album.

AXS: Fifteen years in for Seether, how has the band evolved?

SM: We’re all just wiser and more relaxed, and we’ve learned how to survive out here a lot better than we used to. When we were kids we were in an R.V. and it was like we were indestructible – yeah, we did some stupid things (laughs). We all get along really well – we’ve got Clint Lowery (of Sevendust) playing with us now and he brings such a positive thing in, as well. So we sit around and talk and laugh the whole time, it’s cool. As far as evolution, we just all know where we stand now – there’s no figuring each other’s personalities out and we’re brothers, we’re in this weird marriage. And musically, I’m now comfortable writing stuff that makes me happy and not being concerned whether or not the label is gonna’ tell me I suck at songwriting again, like they used to. I heard from [our old label] every single album that I was shi**.

AXS: That’s got to hurt your feelings.

SM: I was like, “well if I can’t write songs, what am I?” So to have a label that believes in me is awesome. That coupled with having the freedom, that’s an evolution enough for me.

AXS: Your annual Rise Above Fest happens this summer – for those who don’t know, why is suicide awareness important to you?

SM: My brother committed suicide and I spent many years in some sort of haze of booze and cocaine and bad ideas – and it wasn’t a good way to deal with it. So my whole thing was to come out of that and turn it into something positive, take a tragedy and turn it into something good, in a sense. And to give him a legacy. [Rise Above Fest] is dedicated to him – because suicide is one of those things that nobody wants to talk about – it’s like the ugly little thing that’s shoved under the carpet…..so we opened a dialogue and it’s officially the biggest gathering in the world that’s [aimed at] suicide prevention awareness. I’m proud of that.

AXS: Since it’s the fest’s fifth anniversary, anything different happening this year?

SM: It’s two days this year, instead of one, which is awesome. It’s grown in the short little time we’ve had it. We’ve got Korn headlining, we’ve got Shinedown headlining. It’s another one of my little babies so I hoping that what we can do is eventually take it on the road – maybe not as a tour but at least dot it around the country in different cities so it’s not just an annual thing. Sales last year were great so we raised a ton of money. All the bands come in and they understand it’s a charity, everyone brings stuff to sign, everyone just supports it so it’s like a whole bunch of happy feelings back there.

AXS: Back to the new album, what’s your favorite track? I’m sure that’s like asking someone to choose their favorite child.

SM: I like the single “Let You Down” and I like the first song, “Stoke the Fire,” that opens the album because it’s kind of a balls-to-the-wall we mean business track. At this point, whenever there’s new music it’s all good – a year from now I’ll be like, “I’m looking forward to a new album…,” but those are the ones I’m most excited about now.

AXS: Off the subject – if you weren’t an accomplished musician what would you be?

SM: I probably would’ve been a jeweler. I went to college for jewelry design and manufacture, so about three years I spent making jewelry.

AXS: Get out! So what did you work in?

SM: Silver, platinum, gold, I set stones. I recently bought myself a jeweler’s bench [for] my house so I can start making it again. So maybe I’ll take orders for wedding rings and stuff (laughs).

AXS: Be sure to put me on the email list, especially if there’s a ring sale (more laughing.) Wrapping things up, what would like to add?

SM: It feels good to be back and the support’s been amazing and the fans have been incredible. We’re looking forward to playing “a city near you.”